Our team of travel experts can plan your next vacation so that it is a magical experience for your family.

Sit back, relax, and celebrate the magic as I plan your dream Disney destination vacation! 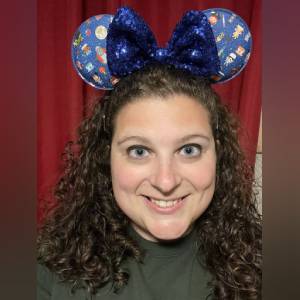 Diana’s love for all things Disney has run deep since she was a child, but it wasn’t until her first trip to Walt Disney World in 2011 that the true obsession took over. In the 7.5 years since her first trip to Walt Disney World, Diana has taken every opportunity she can to spend time in the Disney parks, planning trips of various lengths and each with its own unique experiences and opportunities. She has planned trips for adults, families with children, large groups, and guests with disabilities. Diana has also taken part in many special events in the Disney parks, such as the Epcot International Food and Wine Festival, Epcot International Flower and Garden Festival, Mickey’s Not So Scary Halloween Party (her personal favorite!) at Magic Kingdom, Mickey’s Very Merry Christmas Party at Magic Kingdom, and Pixar Fest at Disneyland to name a few. Diana has stayed in resorts of all price points at both Walt Disney World and Disneyland and has eaten at countless restaurants on property so is ready to recommend at the drop of a hat. In her spare time, Diana is constantly keeping up with all news and updates on the Disney parks all over the world. She truly loves immersing herself in the world of Disney and plans each Disney trip for every client as if it were her own. She prides herself in creating completely customized, stress-free, and affordable vacations for clients that perfectly match their needs.

In May 2014, Diana got engaged at Cinderella’s wishing well in the Magic Kingdom. She then planned a Mickey and Minnie-themed Disney wedding in August 2016, which was followed by a two-week honeymoon in Walt Disney World. During her honeymoon, Diana and her husband Tyler were chosen to Grand Marshal the Festival of Fantasy parade in the Magic Kingdom!

Diana is a graduate of the Disney College of Knowledge and is also highly knowledgeable in other vacation destinations, such as Universal Studios Orlando. She lives in Washington Township, NJ with her husband Tyler and their two cats.

What people are saying

Just wanted to say thank you for taking such great care of us. Our trip was a magical success thanks to you! We appreciate also you being so punctual about getting back to us! I will positively be recommending you to anyone and everyone that I can!

I am pretty sure Diana is the BEST vacation planner I have ever met. My family and I travel all of the time and have been to many places all over the world and there is no one like her. Our trip to Disney this year was probably one of the best vacations we have ever been on and my husband and I are not even big Disney fans. We told Diana this and also filled out a quick sheet for her so that she could get an idea of what we wanted out of our vacation. After we did this, she got to work. We had already booked our hotel but she was able to rebook us a better room for a cheaper price. She then set up all of our dinner reservations and fast passes and got us on all of the best rides. We also have a three year old so she planned the perfect mix of dinners and rides that we would love and that our daughter, Madelyn, would also be thrilled about. Any time I had a question, she immediately answered my messages. And just prior to us leaving, she provided us with an entire laminated mini itinerary that I could fit in my purse that we lived by. Every single detail was to our preference as if we had planned the vacation ourselves. She knows everything about Disney and let us in on any secrets about places to go and things to see. When we booked Disney ourselves two years ago, it was okay but when she did it this year for us, it was absolutely magical for our entire family (even my husband). I think my daughter’s face during the rides and shows we went to sums it all up. Thank you again, Diana!

Diana is the absolute best! Just came back from our Disney Vacation and it was perfect because of Diana! Having Diana plan our trip was the best thing I could ever recommend. She made everything so smooth and easy and stress free. Diana was so thorough and prompt with answering all questions and giving us information. And a bonus – she’s a Disney genius with all the helpful tips and hints on how to make your trip extra magical! I’m using her again for my next Disney vacations.

I like to plan my own Disney vacations, so I didn’t think a travel agent was for me…how wrong I was!!

– Provided me AMAZING daily cheat sheets (that were laminated so they were waterproof) with helpful tips, Park hours, and important reservation information on them-Kept me involved in every step of the planning process, so nothing was left to chance and everything felt personalized

– Did so much more

I highly recommend utilizing an authorized Disney Vacation Planner for anyone and everyone visiting Disney, and Diana is THE BEST!!

Diana ensured we made the made the most of our Disney vacation and introduced us to experiences we had no idea existed. Even if you’ve been to Disney before, it can be overwhelming. Diana’s comprehensive planning services helped us spend less time worrying about details and more time having fun.

Diana was amazing in every way of planning. she took the stress off me booked all my fast passes and dining reservations!! she was always available for questions or concerns. I want to scream from a mountain top how good she is and how your Disney trip is nothing without her touch!

Diana was SO helpful in planning our perfect Disney vacation! she provided us so much insight and booked everything for us! we couldn’t have done it without her help!!

Diana was amazing when she planned our Disney trip for us this year. We had never been during Halloween time and didn’t know what to expect. She booked everything for us from restaurants to fast passes and made recommendations for how to get to all the parks in the 5 days we were there and do everything we wanted. She really knows what she’s doing and makes vacation planning a breeze! I highly recommend her for your next trip!

This lady knows ALL the ins and out of Disney. Not only that but she is incredibly thorough and reliable! I would not trust anyone else but Diana with my Disney vacation!

Highly recommend Diana to help make all of your Disney dreams come true! She is highly knowledgeable and extremely helpful. She was always there to answer any questions I had and knew the answers immediately. I have been to Disney several times, but she helped me book a last-minute trip and taught me so many amazing tips that I never had known before! You MUST use her when booking your next Disney vacation!!! It will make all the difference. ????

Diana has done a great job taking all the stress out of planning a Disney vacation. She even surprised us with a reservation that was hard to get! Never used a planner before but so happy I did!!

Would you like information on joining our team? Our company has openings for travel planners.

Vacation planning doesn't have to be stressful. Magical Travel is here to help you plan your vacation every step of the way. We work for you to give you the best vacation experience that fits your family's needs. If you don't know where to begin you've come to the right place.

Magical Travel is a full-service travel agency. We’ll will make your next family vacation easy for you. We are a Platinum Level Authorized Disney Vacation Planner,  but our experts can find the right vacation experience for you no matter the destination.  Where do you want to go?

Our travel agents are located throughout the United States.

We are headquartered in Southeastern Pennsylvania.